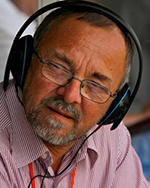 Peter Guise was around at Cabin FM in the early days, producing, presenting, editing across a whole range of output before moving on to be a freelance sports broadcaster with both independent commercial radio and with BBC Local Radio the length and breadth of the country. In this part of the country he is probably best known as one of the commentators for BBC Radio Kent’s ball by ball cricket commentary.

Peter has commentated on cricket from every Test Cricket ground in England (and Wales) and on football at both the old and new Wembley Stadiums. Peter claims that his most memorable moments have been interviewing a few famous cricketers for BBC World Service as he name drops Pakistan’s Waqar Younis & South Africa’s Makhaya Ntini among them.

Peter has returned to his ‘broadcasting home’ to head up Cabin FM’s News & Sport output as well as presenting the drivetime programme between 4 and 7pm weekdays.