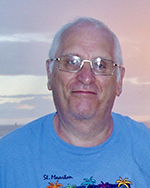 I was born at a very early age in Worcester and came to Kent in 1980 for work purposes. I now live in Hersden with my wife Diane. We have a Son (Paul) and Daughter (Emily). I have been with Cabin FM for 4 years now.

I did my first ‘Gig’ in 1969 when as a 14 year old I was invited, nay, threatened by one of my wonderful teachers to play some music in the school assembly hall during a rainy lunchtime to keep the other 900 or so kids happy. I only had about 6 records and 2 hours to play em. Now, every time I hear the song ‘Sugar, Sugar’ by the Archies I have to have a lie down! The price of fame.

My music tastes are varied but anything that was recorded on the Stax, Atlantic or Tamla Motown Labels is probably my first love. I also like Pink Floyd, Yes and Genesis (my wife thinks that I do this to annoy her, as she dislikes Phil Collins).

A claim to fame was that in 1979, I worked with the Special AKA and told them that their style of music wouldn’t catch on, as Disco and Punk was the order of the day. They got to number 6 in the charts four weeks later with Gangsters! Ah well, long live Two Tone

If you like your music on the easy side, check out my Smooth Sunday show on Cabin every Sunday between 7 and 10am.